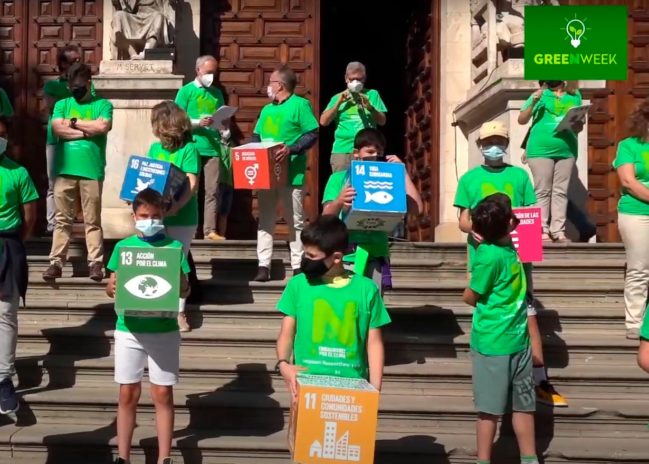 The previous event of the European Night of Researchers and Researchers, GREEN WEEK, organized by the G9 NIGHT consortium brings together more than 4,500 participants.

177 scientists from the universities of the Group 9 Universities consortium have collaborated in the almost 80 activities in all areas of knowledge offered on June 5 and 12.

The science dissemination program of the institutions that make up the Group of Universities (G-9) has brought together 177 researchers with a very clear objective, to bring science and research closer to an audience of more than 4,500 people, mostly young people and children.

The joint project of the Universities of Oviedo, Cantabria, Castilla-La Mancha, Extremadura, Islas Baleares, Pública de Navarra, País Vasco / Euskal Herriko Unibertsitatea and Zaragoza, has been a successful call. The G9NIGHT consortium, coordinated by the University of Oviedo, has organized for the previous event of the European Night of Researchers and Researchers more than almost 80 attractive, face-to-face and virtual activities, thanks to the enthusiastic participation of research staff from different areas of knowledge, including the social sciences and humanities. The response from the public has been very satisfactory, since more than 4,500 people have enjoyed from their homes or educational centers the varied educational offer in science and technology. Talks, games, challenges, guided visits, monologues, experiments and contests have been adapted to the face-to-face and audiovisual format, showing that the dissemination is capable of adapting to different contexts.

The high participation of female researchers stands out in this project, which is framed within the strategic lines of the G9NIGHT project to promote gender equality in dissemination as an essential element. Specifically, almost half of the researchers who have collaborated in the Night are women, 47%. In this way, the project contributes to promoting the visibility of women in science and technology, while providing female role models and references to girls.

In addition, the program has had a series of joint activities that have given a special integrating and cohesion value to this project. The execution has also had the involvement of the scientific culture units of the universities, mediators so that the knowledge and work of the researchers is recognized and valued by the citizens.

The participating universities have designed some joint activities such as reading the manifesto “Ambassador Universities for the Climate”, encouraging the university community to wear a green garment as a sign of support for the planet or placing the image of social networks in green as an action vindication of GREEN WEEK and for World Environment Day.

The institutions that make up Group 9 of Universities (G-9) are joining for the second consecutive year in a consortium to jointly celebrate the European Night of Researchers 2021, coordinated by the University of Oviedo. The European Commission (EC) will finance the activities that the Group will carry out on September 24 in 13 cities of its autonomous communities, within the framework of the aforementioned initiative for scientific and technological dissemination. The project was conceived within the Scientific Culture working group of the G-9 Research Sector and constitutes one of the first collaborative projects of Group 9 of Universities with funding from European Union programs.

The participating universities will be those of Cantabria, Castilla-La Mancha, Extremadura, Balearic Islands, Oviedo, Basque Country / Euskal Herriko Unibertsitatea, Public of Navarra and Zaragoza, with the collaboration of the University of La Rioja.